LEARN ABOUT OUR NATIVE ENVIRONMENT

Action Sweetwater Creek Inc. conducts sessions with local Frankston schools at the Reserve. Students learn about indigenous plants and animals. They also join us in weeding and planting activities. Please contact us to arrange a suitable time. Email: sweetwater.action@gmail.com

In both 2013 and 2017 Doris Pozzi, author of Edible Weeds and Garden Plants of Melbourne: A guide to foraging, identifying and using common wild edibles and garden plants led walks in November through Sweetwater Creek Nature reserve. Along the way she drew people’s attention to the humble and often busily weeded plants that can be eaten in salads and cooked dishes. She pointed out that these often have more nutrition than vegetables we buy, adding that dandelions contain a blend of vitamins and minerals and should be eaten every day.

Each walk was a great success, attended by over thirty people who hung on Doris’s every word. We finished the morning each time with a bbq as well as some of our own creations from our collection of weeds: dock and dandelion quiche; weed falafel, onion weed tartlets. We have also used Doris’s recipe for onion weed and potato soup to accompany the sausage after our winter working bees in the reserve. 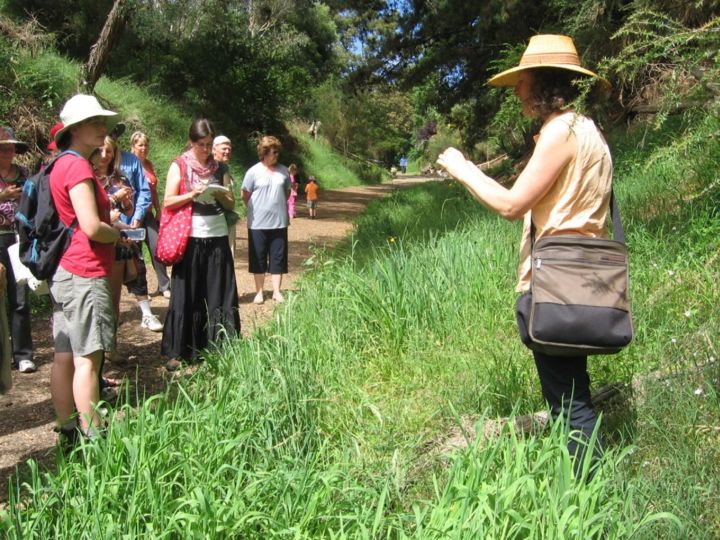 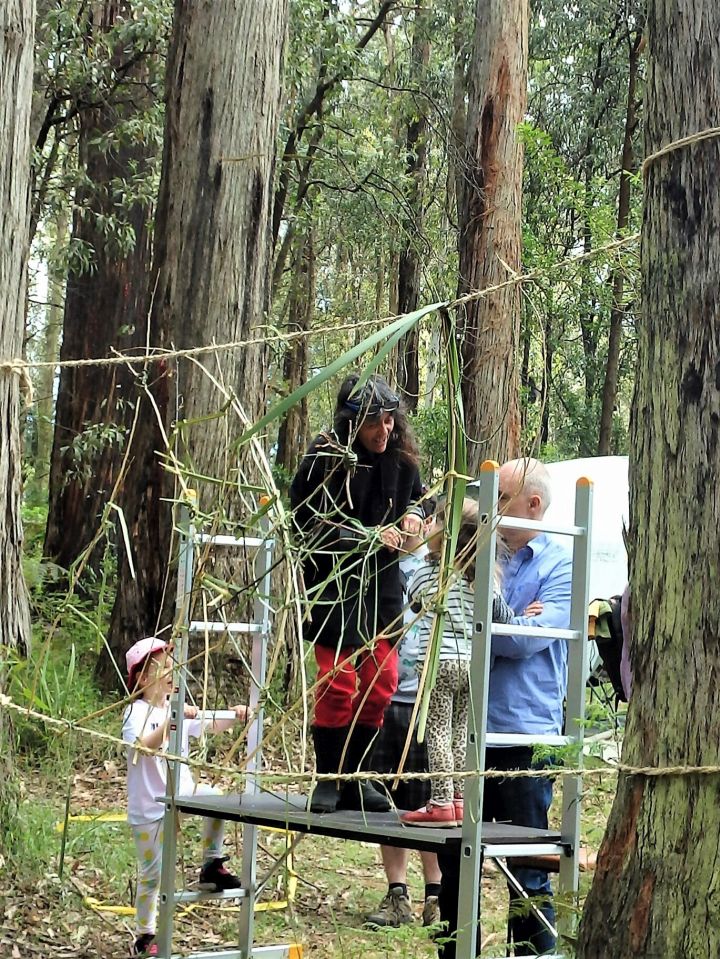 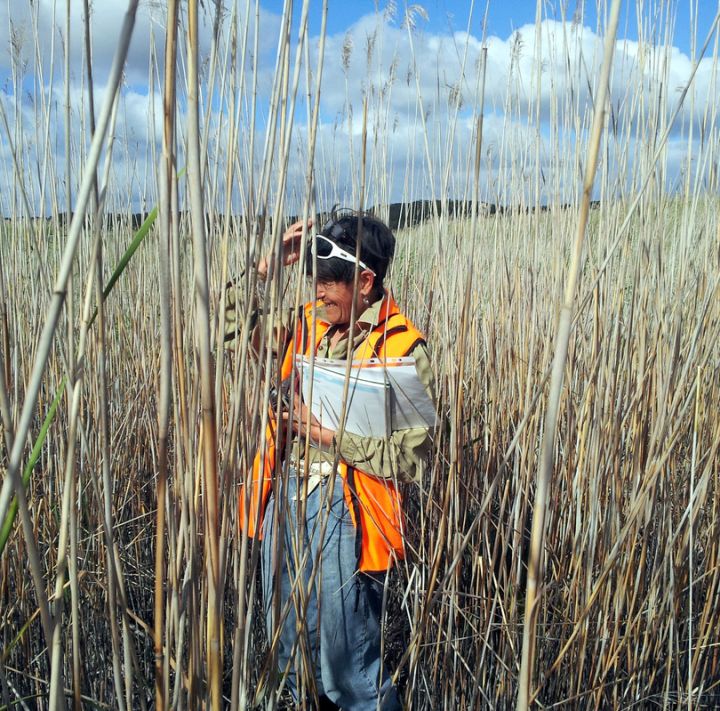 On Saturday 25th a long-planned walk led by leading ecologist Gidja Walker took place in the reserve. We had first met Gidja at a War On Weeds workshop at the Frankston Council’s Indigenous Nursery last year and immediately thought she would be a star attraction for our annual walk. We had many responses to our publicity and had to turn some down once we reached thirty as more would have made the walk unwieldy.

Gidja fascinated us with her ability to read the bio-diversity of Sweetwater Creek Nature Reserve like a book. We learnt of butterflies and moths that both feed on and nurture certain plants, that the pretty blue flowers of the native flaxes (Dianella revoluta and longifolia) are pollinated by native bees; that the presence of the native ground-cover, Honey-pots, just might indicate we have the tiny mouse-like Antechinus in the reserve; that the humble bracken is a rich repository both above ground – its young tips edible and lower leaves a relief for ant bites – and below, its tubers  a source  of nutrients for  fungi→ fodder for insects→  compost enriching the soil. Our eyes were opened often, especially when Gidja discovered a complete micro-system in a sparsely grassed patch of ground, and we came away with a more holistic view of our reserve. We finished the morning with our usual Sausage Sizzle and Gidja cheerfully answering our many questions.

In April, 2014 Geoff Linnell, FCC Natural reserves Ranger, led us on a walk through the reserve. Following is some interesting information he provided on the walk.

The Bunarong People occupied the area where the Sweetwater Creek Reserve is now.  When people from other tribes came into their area they would be welcomed and presented with a gum leaf.  They also held a smoking ceremony during which they burnt Manna Gum, representing the community; Cherry Ballart, representing the dependants/children and Black Wattle which represented the Elders.

Cumbungi  (bulrush) grow in the creek under the suspension bridge.  The stems were ground for flour to make cakes.  They were also used for string.  Phragmites  (Common reed) grow there also on the downstream side.  They were used as children’s spears.  The Wonga vines were also used for spears.  The twisting vines were unravelled and hardened by fire.

Coastal Banksia –  The flower is loved by honey eaters and the Bunarong people would suck the nectar straight from the flowers.  The cones of the coastal banksia were used to transport fire.

Native bees are rarer now but the Bunarong would stick a feather onto the bees’ back and follow it back to the hive to get the honey.

Eel traps were made by the aborigines from lomandra.  When eels were caught they would be hung in a hollow tree with a fire lit at the base to smoke them.  This was to enable the tribe to have food available when they returned to the area.

Aborigines burnt areas to make it easier to walk through and for shoots to develop as an attractive food source for their prey.

Sugar Gliders  eat black wattle sap, fruit and leaves.  The head and body are 16-21 cms long and the tail 16–21 cm. They have been observed at night when a burn was being supervised.

Allocasuarinas  have  separate male and female trees.  The female trees have small red flowers and produce seed cones.  Males have orange tips on the end of the leaves.

Sweet Bursaria has spikes on the stems. The summer flowers smell sweet.  Dried seed pods can be used to treat burns.

Blackwood wattle has pale yellow flowers in winter.  The seeds can be used as flour.  Collect the seeds, put them in boiling water.  Those that sink can be used for planting as they have cracked.  The blackwood has coarse bark.

Short finned eels are in the creek and in the pipes under the Nepean Hwy.  They live in freshwater until the females are aged 25 and the males 10 year old. They then migrate to the bay, then the ocean and breed in the Coral Sea at Vanuatu.  They die but their progeny, glass eels, 2” long return to the creeks and fresh water.  They are brought back by the currents.

Coastal Tea Tree is not indigenous to the reserve but not all are removed.  They are a good habitat for possum drays and birds to nest in.

At the Bunarong Reserve in Frankston the burns held there have resulted in excellent regeneration without any plantings and no tea tree. Burns in Sweetwater reserve have also been successful in regenerating indigenous plants.

Weeds are brought into the reserve on shoes and dogs’ feet, also from garden waste illegally dumped in the reserve.

Ghost fungus was observed near the track down from the turning circle.  It is possible to read by it.

The Kangaroo Apple is poisonous unless treated properly. When they are ripe enough to fall off the tree they can be treated.

Saw sedged Gahnia – The Sword Grass Brown Butterfly lays its eggs at the base of the plant.  When the eggs hatch they have instant food.

Bridal Creeper – biological control of this in the Seaford foreshore using fungus and a leaf hopping insect is working well.

Pandora or Wonga vine – strangles many plants but the jury is out whether it is indigenous or not so we leave it.

Lignotubers are new shoots from the base of a plant after a burn or if the plant is damaged.  They also appear as small buds up the trunk after fire.

Swamp Rats have a short hairy tail which is the same length as their body.  They have thick fur and darker shorter rounded ears.  They live in burrows in the ground and as rodents they aerate the soil.

The Butcherbird is carnivorous.  It raids other birds’ nests hanging its prey from a fork in a tree.

Mistletoe observed in a gum tree near the suspension bridge.  The mistletoe bird sits along the branch eating the fruit and it drops the seeds onto the lower branches where they then grow.  Male birds have a red chest and female’s white chests. They are small birds.

The spotted turtle dove seen often in the reserve is originally from India.

The Bronze Wing Pigeon is a native and has a booming call.

The Crested Pigeon is native but comes from further north in Australia.